History of the United Kingdom

Settlement by anatomically modern humans of what was to become the United Kingdom occurred in waves beginning by about 30,000 years ago. The Insular Celtic culture formed on the islands. Prior to the Roman conquest, Britain was home to indigenous tribes like the Belgae, having a similar ethnic composition to contemporary France and Iberia. The Romans ruled Britain for four centuries, pushing the Celts to Wales, Cornwall, Scotland, and other peripheral areas. By the 10th century, the Anglo-Saxons formed England while the Gaels and Picts established Scotland.

The Norman invasion of 1066 led to the creation of the Anglo-Norman culture. In the 1320 Declaration of Arbroath, Scotland consolidated its independence from England. The English monarchs, as claimants to the French crown, were heavily involved in French conflicts like the Hundred Years War. The Protestant Reformation led to the establishment of Anglicanism in the country. At this time, Wales was fully integrated into the English realm and Ireland - under the Kingdom of Ireland - was increasingly being colonized through settler plantations. In 1603, the kingdoms of England, Scotland and Ireland were united in a personal union when James VI, King of Scots, inherited the crowns of England and Ireland and moved his court from Edinburgh to London. 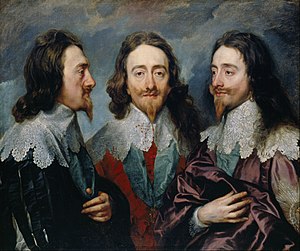 Charles I in Three Positions by Anthony van Dyck, painted in 1633

In 1639, the Wars of the Three Kingdoms erupted between the three countries under the House of Stuart, followed shortly by the beginning of the English Civil War in 1642. Oliver Cromwell abolished the monarchy, executed King Charles I, and established the Commonwealth in 1649 - a period known as the English Interregnum. Charles II, the son of King Charles I, was restored as the monarch of the three realms in 1660.

In 1660, the heir presumptive to the throne, James Stuart, Duke of York, died of smallpox at the age of twenty-seven. If Charles II did not father any children, that would leave the Princess Royal Mary Henrietta as the next monarch of England, Scotland, and Ireland. Over the next seven years, Charles II fathered many illegitimate children until his untimely and painful death in 1667. As a result, the Princess Royal was crowned Queen Henrietta, the first female monarch since Elizabeth I sixty-three years ago. Her husband, the British noble the 2nd Duke of Bedford, was made consort. He requested the title king consort, as Lord Darnley had before him, but this was rejected by Parliament and quashed by the Queen herself.

Despite being challenged by her illegitimate nephew James Fitzroy, Duke of Monmouth, she was coronated in April 1667. Shortly after, Henrietta signed the Treaty of Breda with the Netherlands, relinquishing claims to New Netherland and restoring Guyana status quo ante bellum. The Earl of Clarendon was blamed for England's loss in the Second Anglo-Dutch War, the loss of Tangiers, and the Sale of Dunkirk and was subsequently impeached and removed from office. He was banished to France and died there years later.

As the result of France's invasion of the Spanish Netherlands, the Treaty of Madrid was signed years before in 1669 with Spain in order to settle Anglo-Spanish disputes in America. In response to the French invasion of the Netherlands, Henrietta formed the Triple Alliance (consisting of England, the Netherlands, and Sweden) in order to counter French expansion. Soon after, French forces were subdued in the Peace of Aix-la-Chapelle. In 1672, France invaded the Dutch Republic again. This ultimately led to their defeat in 1674 and the 1676 Treaty of Nijmegen.

In 1689, the Company of Scotland, a royal trading company, was established. The Company attempted to colonize the Caribbean island of Vieques and founded a settlement by the name of Jamesport in modern South Tussenland. In 1690, the Company re-established a trading factory in Hirado, Japan. The factory in Japan would eventually be abandoned in the early 18th century, while the Jamesport would disband the Company and settle in the Bahamas instead.

Throughout the 1660s and 1670s, Henrietta was unable to enact religious reformations due to Parliament threatening to withhold funds for various wars and expeditions. Starting circa 1680, the Queen began to support Calvinist doctrine within the Church of England, increasingly becoming more anti-Arminian. She granted licenses to several Nonconformists to worship God with non-Anglican rites. The Toleration Act 1682 formally granted freedom of worship to Nonconformists who took an oath of allegiance to the English monarch. This can be said to have been influenced by her numerous Calvinist affiliates and family members, including her authoritative son William III of the Netherlands.

Latitudinarians, those who supported a 'broad church' and pluralism of opinion within Anglicanism, opposed Henrietta's support of increasingly pro-Calvinist doctrines and advocated for the Church to become a via media (middle road) between the extremes of Catholicism and Protestantism; Arminianism and Calvinism; high church and low church. In response, Henrietta's supporters blamed Anglo-Catholic attempts to impose hierarchical sacerdotalism on the Church as the cause of the English Civil War, thus justifying their position.

Fueled by decades of anti-Catholic sentiment, Anglican clergymen began spreading rumors between of Jesuits plotting to assassinate Queen Henrietta and install Philippe I, Duke of Orléans - the Queen's brother-in-law - as King. Catholic orders such as the Society of Jesus were attacked alongside English Catholic nobles and commoners. It lasted from 1681 and 1683, and was deemed the Popish Hysteria.

Her marriage to her husband, the Duke of Bedford, deteriorated from 1686 onward. Henrietta discussed the possibility of divorce with leading nobles. This idea was refused by Parliament, a body filled with many sympathetic to the Arminian cause and those against divorce and remarriage. Following this incident, accusations of treason and adultery were fabricated against the Duke, who was subsequently outlawed to the colony of Virginia, where he would die in the town of Galena.

Henrietta would die peacefully on 18 May 1692 at the age of sixty-one in London. She would be buried at Westminster Abbey and succeeded by her son William III as the monarch of England, Scotland, and Ireland.

As Stadtholder of the Netherlands and King of England, Scotland, and Ireland, William III created a personal union between the British isles and the Dutch Republic until his death in 1712. His wife, Elizabeth Charlotte of the Palatinate, became queen consort. His accession would mark the foundation of the Stuart-Nassau dynasty, which would rule the isles until 1777.

William aimed to strengthen the power of the monarchy (notably by discreetly preserving non obstante) and the House of Stuart-Nassau's hold over the islands of Britain and Ireland. He promoted several close allies to high positions in government, such as appointing Henry de Nassau, Lord Overkirk as Lord Chamberlain of the Royal Household. The King's strategic manipulation of Parliament and purchase of votes ensured that votes would often swing in his favor.

Formation of the Kingdom of Great Britain

In 1692, the Act of Settlement was passed, ensuring that only Protestants, preferably legitimate descendants of James VI, King of Scots, could succeed to the throne. This decisively excluded the French Catholic line of Henrietta Anne, Duchess of Orléans (Queen Henrietta's sister).

Like his mother, the King was an avid Calvinist. He also strongly supported the model of freedom of religion found in the Netherlands, and wished to emulate it in England. In order to gain the favor of Scottish Presbyterians and English Catholic nobles, he proclaimed the Declaration of Indulgence in 1693, suspending several religious penal laws. It is said to have promoted a common Calvinistic tie that bound "conformists and nonconformists, episcopalians and presbyterians" together, while others characterize it as a ploy to "gain tolerance for Rome under guise of tenderness for Geneva". Due to William ensuring Protestant succession the year earlier and the defined bounds of the proclamation, the Declaration was not viewed as a major threat to the stability of the Church of England by the Archbishop of Canterbury, though it remained controversial.

The King was focused on uniting England and Scotland into one kingdom and sought to hasten the process. In 1695, his trusted favorite in Scotland, the 1st Earl of Portland, threatened defiant members of the Scottish Parliament with economic sanctions from England and the Dutch Republic if they did not vote to unite with England. This was just as the Company of Scotland disbanded, as it had failed to establish settlements in America. The same year, a major harvest failure struck Scotland, placing pressure on many nobles to accept union. Additionally, the King made sure to emphasize his descent from the Stuart monarchs of Scotland, promised free trade, and stressed the Declaration of Indulgence.

In 1696, the Acts of Union were passed and given royal assent in Scotland then in England. The political union took effect on 1 June 1696, creating the Kingdom of Great Britain. The Earl of Portland, the Duke of Queensbury, and the Marquess of Montrose are credited as some of the main promulgators of the Act in Scotland.

Since the Restoration of 1660, war between the Presbyterians and Episcopalians of Scotland devastated the country. Charles II re-established an official episcopal church in Scotland in 1661 and betrayed the Presbyterian Covenanters, triggering a further four decades of violence between the two, focused in the southwest of Scotland.

Large numbers of British ministers were encouraged to study and reside in the Netherlands. This resulted in a large British, and particularly Scottish, community in the city of Rotterdam. The 200 British ministers in the city by 1700 laid the foundation for a permanent community of Scottish origin in Holland, which would exist for centuries to come.

In 1693, the Palatine College was founded in Williamsburg, Virginia, by letters patent issued by King William III. It was the first institute of higher education in Virginia and remains one of the oldest in America. Its name is a reference to the birthplace of Queen Consort Elizabeth Charlotte, the Electorate of the Palatinate in modern Rhineland.

The Nassuvian century is defined as the end of William III's reign and the dissolution of the Anglo-Dutch union in 1712 to the death of Queen Elizabeth II in 1777. It encompasses the last four monarchs of the Stuart-Nassau dynasty and the majority of the 18th century. It is also referred to as the 'short 18th century' in Britain.

William III died in 1712, splitting his realms among his two sons. His eldest, William IV, would become King of Great Britain. The stadtholdership would pass to his second son, who would become Maurice II, Prince of Orange.

Unlike his father, William IV was not particularly fond of absolutist rule and increasingly came under the influence of Parliament and Latitudinarian thought. Defined political parties began to gain prominence during his reign of 1712 to 1743, with their origins ultimately coming from the Restoration of 1660 and the reign of Charles II.

Retrieved from "https://wiki.rosestulipsandliberty.com/w/index.php?title=History_of_the_United_Kingdom&oldid=9145"
Cookies help us deliver our services. By using our services, you agree to our use of cookies.